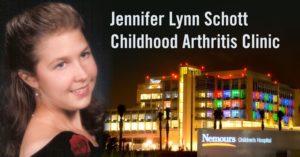 As a child, Jenny never wanted to be an outsider, and to her family and friends, she never was. But having been diagnosed with juvenile rheumatoid arthritis in 1980 when she was about 2 years old, she would soon find it impossible to live like everyone else. After a diagnosis during a hospitalization for severe soreness and swelling in one knee, Jenny was prescribed increasing dosages of baby aspirin, up to 60 per day, to deal with the inflammation, soreness, and pain. The doctors tried all they knew, but treatment for the disease was not well known and she was very much an experiment for the doctors at that point. Despite the severe pain and experimental medication, Jenny strived very hard to maintain a normal childhood, keeping up with all the other kids until finally around the age of 8 when it just became impossible. While she excelled socially and academically, her physical condition was deteriorating quickly.

Jenny became an accomplished and articulate public speaker, winning speech competitions as well as reading from the Bible at church. Though electric scooters and wheelchairs became part of her high school identity, she continued to excel, graduating first in her high school class with the highest grade point average, a huge accomplishment!

It was in high school that Jenny started to experience what would become the highlight of her life, teaching and helping others. She tutored other students and eventually started her own tutoring business. After high school, Jenny was determined to make her dream of becoming a teacher come to fruition. She received a number of monetary scholarships to continue her education including acceptance into Rollins College and a full paid scholarship to Stetson University because of her excellent academic performance. But she could not accept them because it would have required her to keep a full academic schedule.

At this point in her life, her medications and physical condition were becoming so extreme that this wasn’t an option. However, determined as ever, Jenny learned how to drive a specially designed van so she could get back and forth to college completely on her own since living away from home at this time was not possible. So she enrolled in Seminole Community College (now Seminole State College) which allowed her much more flexibility. While at SCC, Jenny was Founder and President of a support group called “Inside the Outsiders”, where students dealing with handicaps could come together and share experiences and provide support to each other. She graduated from SCC with High Honors and Distinction with a 4.0 GPA, was an Officer of the Phi Theta Kappa Honor Society, and an Associate of Arts in Mathematics degree in hand.

Unfortunately, as Jenny was working hard to live her dream, the arthritis was working harder at destroying her body. Over the course of her life, Jenny had virtually every joint in her body operated on and either totally replaced or fused by inserting steel rods in places like her wrists and ankles. Still refusing to let the arthritis take over total control of her life, Jenny was able to get a job as a Mathematics and English teacher teaching students with learning or physical disabilities at a private school, and finally achieving her dream.

Sadly, her dream became a physical nightmare. Her condition worsened until finally she had to leave the teaching field. Eventually Jenny was in so much pain that she had very limited mobility and spent much of her time with doctors, in hospitals, or at home in bed. The disease, as well as the effects of 20 plus years of drugs, operations, and experimentation, was affecting all of her internal organs. Her doctors, realizing how much pain she was in, kept her heavily sedated until finally they told Jenny that she had less than a year left to live. Jenny was at peace with this news, even orchestrating her own funeral service by selecting her clothes, readings from the Bible, and the music. And one of her last wishes was a very unselfish one. Jenny wanted to create a scholarship for handicapped students at Seminole Community College. This memorial endowed scholarship continues on to this day, benefitting many disabled students in the pursuit of their dreams.

Jenny peacefully passed away at the age of 26, a fully accomplished teacher having taught many lessons to everyone she met whether student or observer.

We hope Jenny’s story inspires you. At the time Jenny was diagnosed with arthritis there were few medications to treat her arthritis. Now with more modern medications, children with arthritis have a much better quality of life but still struggle with school, chronic pain, challenges of having a chronic disease, and being “different” from other children. In tribute and honor of Jenny, we are dedicated to engaging children who have arthritis to help them cope with the educational, emotional and social burden of arthritis beyond the medications. Nemours rheumatologists, in partnership with UCF PedsAcademy, in the Jennifer Lynn Schott Childhood Arthritis Clinic, will give children with arthritis the support for their educational and emotional needs that are often not met in the traditional clinic. Jenny’s struggles with education and her ability to persevere and become an educator herself is an inspiration for this partnership of PedsAcademy and Nemours so the entire child is treated including all aspects of quality of life.